A new research paper by the Hungarian Helsinki Committee, supported by the Friedrich Naumann Foundation for Freedom, shows just how deep this phenomenon runs: it provides a snapshot of the state of execution of judgments by Hungary and by the Hungarian authorities by looking at judgments issued by domestic courts, Hungary’s Constitutional Court, the European Court of Human Rights, and the Court of Justice of the European Union. 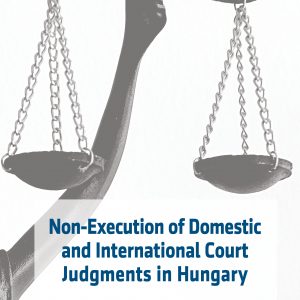 Hungary’s record on the implementation of European Court of Human Rights (ECtHR) judgments continues to be poor: 81% of the leading cases from the last 10 years are still pending execution, with non-executed judgments indicating systemic or structural problems in the Hungarian legal system. General measures that would be necessary to prevent similar rights violations as the ones established by the ECtHR are very often not taken, and the Government’s approach towards the implementation process lacks transparency and inclusivity. Recently, severe problems have emerged with regard to the execution of judgments by the Court of Justice of the European Union (CJEU) as well, leading up to the point where the European Commission referred Hungary to the CJEU over its failure to comply with a CJEU judgment.

The research paper can be downloaded in English here:
Non-Execution of Domestic and International Court Judgments in Hungary

An English 3-page summary of the report’s most important outcomes is available here; the Hungarian version of the research paper can be downloaded here.