The Hungarian Helsinki Committee received the European Union Civil Solidarity Prize on Monday morning in recognition of its activities during the coronavirus pandemic. The prize was awarded to the Hungarian human rights organisation by the European Economic and Social Committee. This is the ninth major international recognition of the organisation’s outstanding work in the last five years. 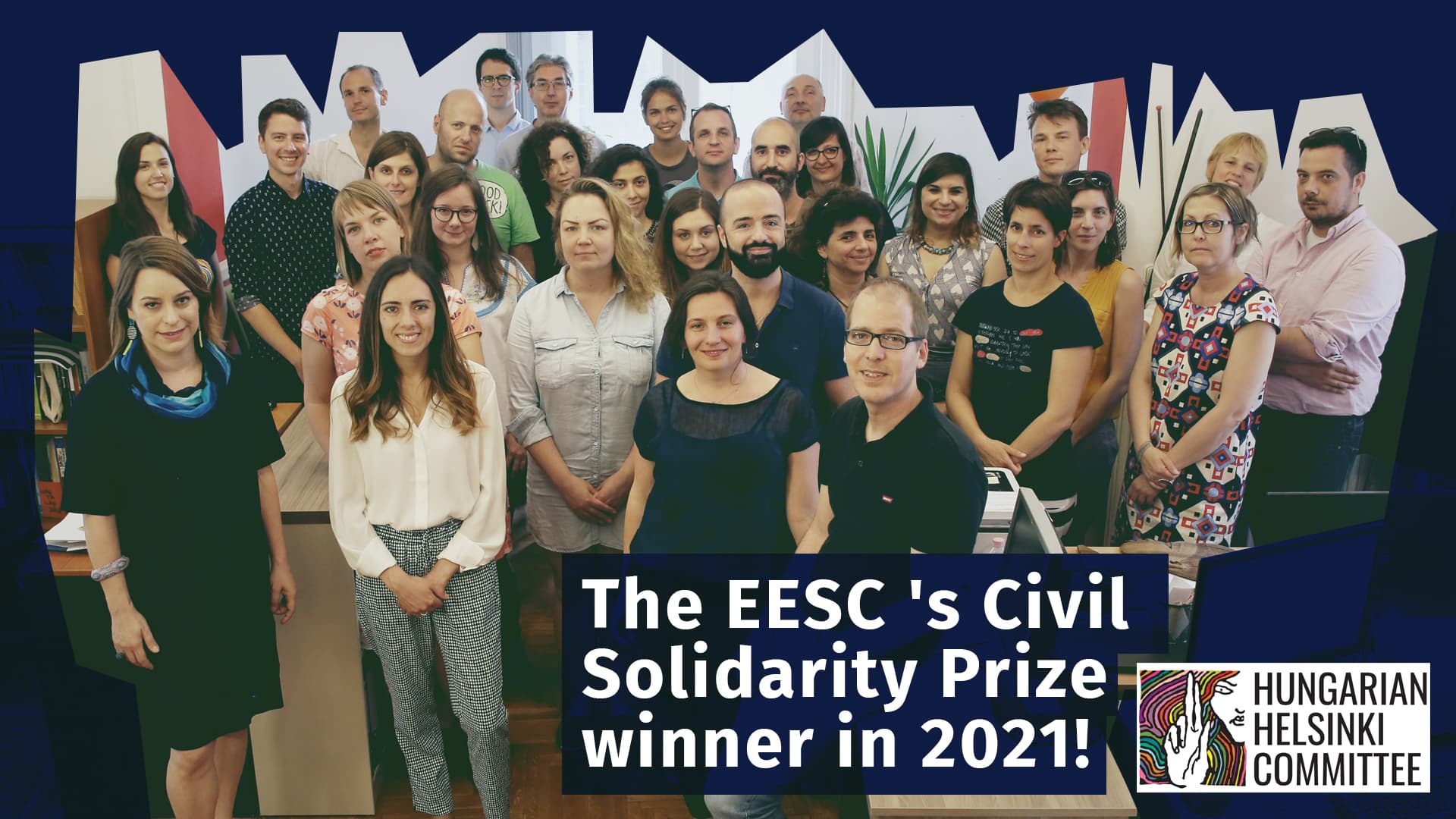 ‘Awarding the Hungarian Helsinki Committee with the EESC Civil Solidarity Prize is of course a great honour for us. But it is much more than that: it confirms that calamities must never be used as a pretext to curb democratic achievements and to scape-goat vulnerable minorities. Such moves are antagonistic to the values on which the European Union was founded, and those who courageously stand up against them do the right thing. The prize gives us a lot of strength to continue our gap-filling work and defend vulnerable human beings and vulnerable human rights values at risk,” said András Kristóf Kádár, co-chair of the Hungarian Helsinki Committee at the online awards ceremony.

As a leading human rights watchdog in Hungary, the HHC went far beyond the traditional role of a legally focused NGO. It closely monitored and stood up against attempts to use the COVID-19 pandemic as a pretext to further undermine the rule of law in the country. It helped with regular free legal advice to the Hungarian Medical Chamber, and published several plain language, multilingual information materials on the lockdown and other COVID-related measures. Moreover, the NGO found innovative ways of promoting solidarity in an increasingly polarised Hungarian society. For example, staff collected laptops for a foundation supporting the home-schooling of disadvantaged children, sewed and gave masks to a homeless shelter, and donated the compensation for defamation it had obtained at court from the government to a health foundation to purchase protective gear for medical workers.

The HHC provided free legal assistance in a variety of human rights-related cases linked to the pandemic, including to: victims of abuse of authority by police officers in lockdown-related situations, seriously ill patients expelled from hospitals because of a much-criticised government order to vacate hospital beds, members of underprivileged groups who were disproportionately sanctioned during the pandemic but had no means to engage in a mainly online legal procedure, and foreign students unlawfully deported from Hungary as part of a government propaganda campaign to blame foreigners for the pandemic.

Established in 2006, the European Economic and Social Committee awards the Civil Solidarity Prize to NGOs or individuals each year. Creative and innovative initiatives that promote European identity and integration compete on a topic that changes from year to year. In 2020, 250 organisations from 25 EU Member States vied for recognition based on the theme: ‘Civil Action against the Many Negative Social Consequences of the Coronavirus Pandemic’ and 23 organisations received the Prize.

The Hungarian Helsinki Committee is a human rights organisation founded in 1989. Since 1994, it has provided free legal assistance to tens of thousands of victims of human rights violations. Its traditional areas of activity are the rights of detainees, action against violence committed by law enforcement agencies and asylum. Since 2010, all of this has been complemented by work to defend the rule of law in Hungary. The motto of the organisation is ‘your right is our profession.’

Over the past five years, the HHC and its leaders have received several international awards. The European Union Civil Solidarity Award is now the ninth such recognition in a row. Among others, the HHC has previously received the Gulbenkian Prize in Portugal, the Sakharov Prize for Freedom in Norway and the Pro Asyl Prize in Germany. This newest award demonstrates that the Hungarian Helsinki Committee has become one of the most well-known and best recognised human rights organisations in Europe.