András Patyi has become a Vice President of the Kúria (Supreme Court of Hungary) based on recommendation of the new Chief Justice recently elected against clear objection of judicial representatives.

Prime Minister Viktor Orbán’s loyal follower András Patyi was appointed Vice President of the Kúria in April 2021 for six years, effectively becoming number two man of Hungary’s Supreme Court. Patyi’s appointment clearly shows how the Hungarian Government is taking another step towards completely controlling the judicial system. Like the recently elected President at the Kúria, Patyi did not reach the top following a long career as a judge either. 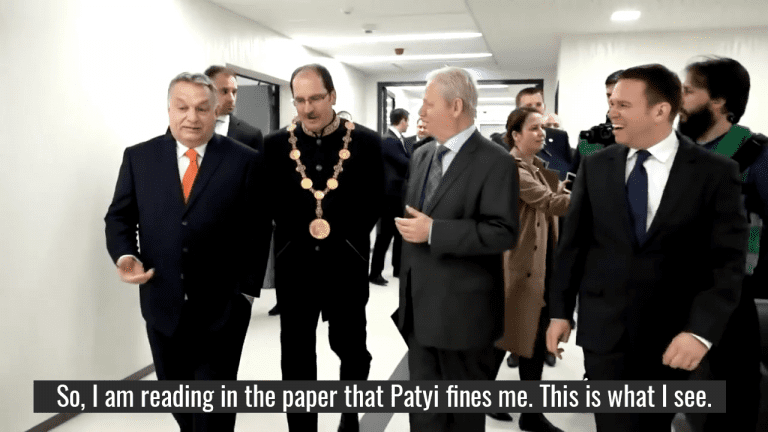 One loyalist recommending the other

On 1 January 2021, a new Chief Justice with wide ranging powers took office in Hungary. As President of the Kúria, Justice András Zs. Varga gained a decisive role in appointment and promotion of judges within the top tier of the judiciary. He also became entitled to select the Vice Presidents for appointment by the President of the Republic.

Justice Varga has never served as a judge. For a decade, he served as a deputy to the current Prosecutor General. In 2014, during the course of the court-packing process, he became a member of the Constitutional Court. He was appointed as Chief Justice despite the National Judicial Council, consisting of judges elected by their peers, rejecting his nomination by 13 to 1.

Justice Varga publishes frequently. A compilation prepared by the Hungarian Helsinki Committee of public statements, academic quotes, and decisions taken by the freshly appointed Chief Justice of Hungary mirror a person, who is perceivably loyal towards the ruling majority and an advocate of building an illiberal state in Hungary. In his 2019 book, he claims: “The idol of the rule of law is jealous (it does not recognise any other value than itself), therefore it is totalitarian.” In an academic piece, he argues that “the concept of judicial self-administration is a consequence of a misunderstanding”.

The President of the Republic, on recommendation of Justice Varga, recently appointed his first deputy, András Patyi.

Patyi’s judicial career is not ordinary in any way. He ran a short career as judge between August 2009 and December 2011 when he unexpectedly resigned from his position as justice to become the Rector of the University of Public Service (NKE) – a university heavily supported by the Fidesz Government. Later, while still serving as Rector of NKE, he was also appointed President of the National Election Office (NVB). In 2018 he suddenly resigned from all his positions to resume his judicial career. It was public knowledge that he was preparing to become Chief Justice of the separate administrative court system planned by the Government. Under heavy international pressure, the Government later dropped the idea of establishing the administrative courts. Eventually though, Patyi won his appointment and became Head of Panel at the Kúria without competition. None of this would have been possible without the legal amendment known as ‘Lex Patyi’ that was introduced specifically to pave the way for Patyi’s appointment.

In the summer of 2018, two Fidesz MPs filed amendments to the Law on the Status of Judges to prepare for Patyi’s appointment as a Kúria judge. The objective was to allow Patyi to be able to return as a judge without competition. Lex Patyi amended the law, allowing him to automatically fill the position of Head of Panel, for which a separate competition would have had to have been issued. The law also provided that his term of office as Rector of NKE could be considered as time spent in judicial service, earning him seven additional years of ‘experience as judge’. With this modification to the law, András Patyi became eligible for the position of justice of the Kúria and now may even be considered as justice      with the longest service as a Kúria judge.

In his previous job as President of the National Election Office, Patyi showed himself fully loyal to Government policies. He played a significant role in denying important national referendums on the expansion of the Paks nuclear power plant, corruption cases and the law stigmatising NGOs. An iconic moment of his term was when he publicly apologised the Prime Minister for levelling a large fine against him for illegally campaigning with videos of pre-schoolers during the 2018 election. A couple of weeks later, still during the 2018 election campaign, András Patyi as Rector of the NKE gave a speech on the side of Viktor Orbán in which he expressed his gratitude to the Government. His key importance and the Government’s confidence towards him is also indicated by the fact that direction of the National University of Public Service was taken over by the Prime Minister’s Office in 2018 immediately after Patyi resigned.

Perhaps the most important of the above is his position as Head of the Unification Panel, because this is not a traditional court leadership role. It is rather a privileged position with responsibilities that grant him the surplus power to determine legally binding interpretation of laws.

The Hungarian Helsinki Committee has deep concern for this turn of events. Combined with the election of András Zs. Varga as Kúria President, this represents a new attack on judicial independence. The situation not only deepens the constitutional crisis of the Hungarian judiciary, undermines the system of checks and balances, and poses a particular threat to the protection of fundamental rights in this country.