For decades, people from the city would buy summer houses in the ancient village of Bilyky. It was peaceful there. The vistas were beautiful and the air was clean. This changed when in 2011 a Russian investor came to open a pig farm. He used the existing, open sewage system. Soon the number of pigs exceeded 60.000, when only 6.000 were permitted.

The smell of sewer gases became unbearable. Clothes drying outside were suffused with it. The manure and chemicals poisoned their water sources. Then increasingly people in the area started to get sick. Many sold off their summer houses, but local residents refused to leave. It was their home, and they would protect it.

Writing letters was not enough

Lydia Pluzhnyk, a resident of Bilyky, started to develop thyroid problems. She became one of the ten most active residents leading a local protest. They wanted to stop the farm from damaging their health, and their environment. They asked the company to build better facilities, in accordance with environmental legislation. They wrote letters and talked with various regional institutions. Lydia knew that they would need legal expertise, so they contacted an environmental NGO and several human rights lawyers.

One of these lawyers was Olga Melen. She helped residents to collect evidence, draw up necessary documents based on their rights to a healthy environment, and prepare the lawsuits. Yet after five years, nothing had changed. So while court cases were running, residents started blocking the territory of the pig farm. Then something shocking happened.

Police officers were deployed to remove the protesters. Officials who had before sat down with the residents drinking coffee, were now beating them up. They were kicking people, breaking arms, even injuring a teenager.

The protesters did not give up, and persisted for eight months. The protesters took shifts. Night and day, they made sure the terrain around the farm was always blocked. The company tried unsuccessfully to sue protesters for this, claiming material damages. The violence and legal threats scared the protesters, but they knew that if they gave up, their homes would remain uninhabitable.

In April 2017, thanks to the legal actions and continuing protests, the investor closed the pig farm. Later that year, the pig farm both violated the lease terms and several environmental laws. Olga knows that the case has largely been won. She is still working to make sure the lease agreement for the land is permanently cancelled. But Lydia and her fellow villagers can finally breathe well again.

Lydia hopes that in time, people from outside will start coming back to enjoy the beautiful environment of Bilyky again. 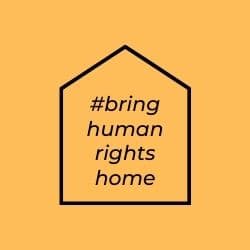