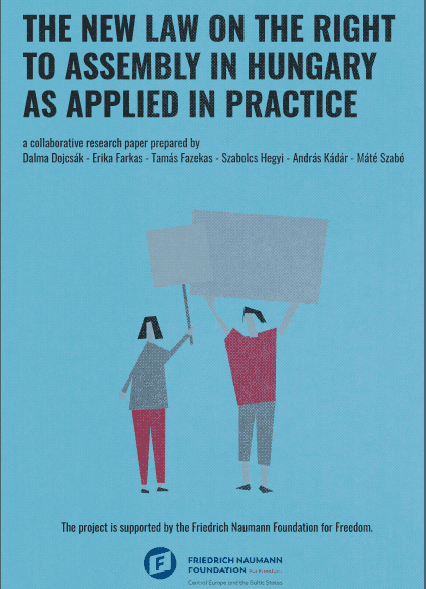 The Hungarian Helsinki Committee conducted a research project together with lawyers of the Hungarian Civil Liberties Union on the application of the new assembly law of Hungary, adopted in 2018. The objective of the research was to look into the case-law of courts and decisions taken by the police as assembly authority in order to reveal the impact of the new legislation on the right to peaceful assembly. The project was funded by the Friedrich Naumann Foundation.

The goal of the project was, amongst others, to analyse how the introduction of certain new measures, such as the compulsory negotiation in the notification process, the codification of new grounds for prior ban of assemblies, the differing terms for holding rallies on public and private venues, as well as the new definition of the notion of assembly affected the freedom of peaceful assembly. The research paper provided a rights-based analysis of the new assembly law as applied in practice taking into account the issues revealed by the case-law, examining conformity with Hungarian constitutional traditions and the jurisprudence of the European Court of Human Rights.

The results of the research show that in many cases, the new law provides an opportunity for the police to impose undue restrictions on the right to peaceful assembly. Although courts seek to maintain the constitutional traditions of Hungarian assembly law and to preserve the level of judicial protection of this fundamental right, in several cases, administrative requirements deprive organisers from the possibility of judicial review as to the substance.

Conclusions of the research have been summarized in a research paper drawn up in English, available here: