The Hungarian Helsinki Committee went to court on 1 October 2017 because of the misleading statements of the “National Consultation questionnaire” that misrepresent facts. HHC wants the court to establish that the statements in the “questionnaire” sent to every household by the Cabinet Office violated the organization’s right to good reputation. HHC also asks the government to issue a public apology and pay moral damages in the amount of HUF 8 million. 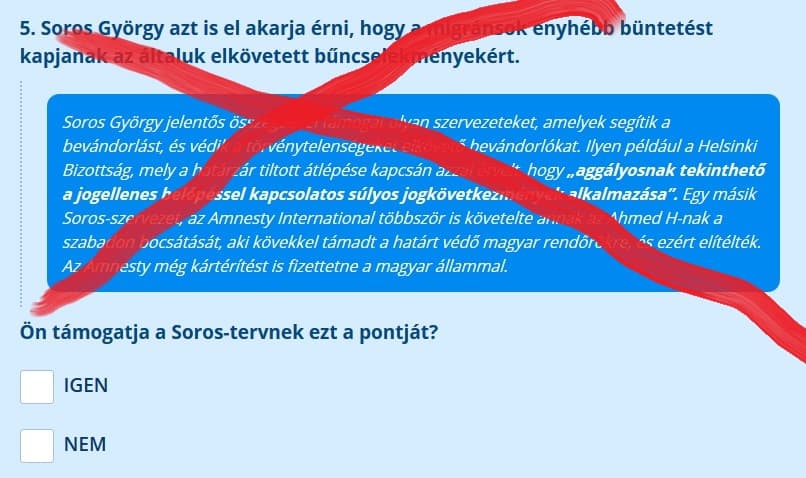 According to point 5 of the questionnaire, “George Soros would also like to see migrants receive lighter sentences for the crimes they commit. George Soros, with significant amounts of funding, supports numerous organizations that assist immigration and defend immigrants who have committed unlawful acts. One example, the Hungarian Helsinki Committee, with regard to the prohibited crossing of the border argued that ‘the application of strict legal consequences with regard to unlawful entry may be considered concerning’.”

However, the Helsinki Committee has never encouraged more lenient punishment for crimes committed by “migrants” or “immigrants”. HHC has always spoken for equal rights. The truncated citation in the questionnaire comes from a HHC material  drawn up before the introduction of the so called border fence related offences in September 2015. This paper criticized the proposed regulations by building primarily on the 1951 Refugee Convention. “The use of such severe legal ramifications related to illegal entry is troubling in light of the jurisprudence of the European Court of Human Rights. Criminal penalties, in particular prison sentences, can only be introduced, if the person in question has already been expelled. However, according to the new rules, asylum seekers will immediately be criminally liable for simply crossing the border fence.”

The chunk of sentence completed by the Cabinet Office conveys a false impression, as if the Helsinki Committee wanted to provide “migrants, immigrants” with a privilege, as opposed to and to the detriment of the Hungarian citizens, when brought to court for any kind of offence. That is not the case. The Helsinki Committee has taken a stand in a significant dispute on whether asylum seekers’ irregular crossing of the border should be made punishable.