Although thousands protested, and a petition against the law was signed by more than 100,000 people, Parliament showed that is not interested in what Hungarians think. Parliament passed the Propaganda Law, banning LGBTQI-themed educational programmes, products, and advertising seen by those under 18 years of age. 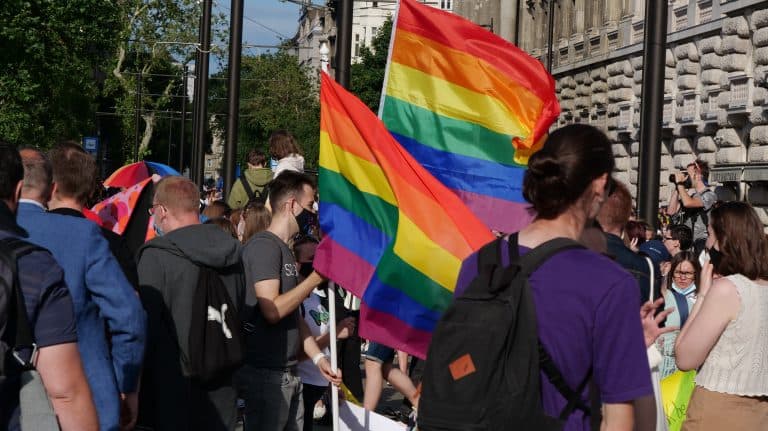 Parliament passed an amendment that would ban all products, advertising and media content seen by those under 18 that depict homosexual or transgender people, bans the appearance of LGBTQI people in public service commercials, and bans all LGBTQI-themed educational programmes that mention the existence of homosexual and transgender people (even just in part).

The amendment is eerily similar to the Russian law passed in 2013 known as the Propaganda Act, which, in addition to provoking hatred and incitement against the LGBTQI community, also makes scientific dialogue and outreach work on homosexuality and transgenderness impossible. The amendment clearly violates the right to freedom of expression, human dignity and equal treatment. This move endangers the mental health of LGBTQI youth and adults, and inhibits them from accessing information and support in a timely manner for preventive purposes. LGBTQI people have the right to live as members of society with equal dignity, and without stigma and oppressive taboos.

In Hungary, almost two-thirds of LGBTQI students have already been verbally harassed because of their sexual orientation, and more than half for their sexual self-expression. Now, pro-government and right-wing MPs have let LGBTQI youth down: they have made it impossible to hold sensitising programmes and dialogues that promote acceptance.

On Monday, June 14, 10,000 people protested in front of the Parliament against the amendment. More than 100,000 people also indicated by their signatures that they do not want the propaganda law passed. According to the recently published IPSOS 2021 poll, 59% of Hungarians say that same-sex couples should have the same rights for adoption, and 60% say that same-sex couples make as good parents as heterosexual couples. Therefore, the propaganda law is being forced on people without social support, and hopes to profit from the incitement of hatred.

This is not the government’s first blow to LGBTQI people. In the spring of 2020, legal recognition of the gender of trans and intersex people was made impossible. In December, passages were introduced into the Fundamental Law of Hungary (Constitution) that stigmatised transgender people. Furthermore, an amendment to the Civil Code made it even more difficult for same-sex couples to adopt. The real losers of this amendment were the children who have to spend more time in State care instead of finding a loving family as soon as possible.

“Even though the government is trying to make an enemy out of LGBTQI people, the last few days have shown that Hungarians are not asking for incitement to hatred. In the next period, we will focus on using all available legal means to challenge this illegal and inhumane law at home and abroa,” said Luca Dudits, Managing Director of the Háttér Társaság.

“The key is to tell LGBTQI youth and their families that they are not alone, that the masses stand up for their rights. This was done by 10,000 protesters and 100,000 signatories, and everyone who has posted or spoken out against this evil law. Let’s stand together on July 24 at the 26th Budapest Pride Parade and let everyone know: we can’t be silenced, we can’t be banned. Reality cannot be banned,” added Viktória Radványi, the organiser of Budapest Pride.