The demonisation of migrants is the first step leading to the attacks against those showing solidarity with them. 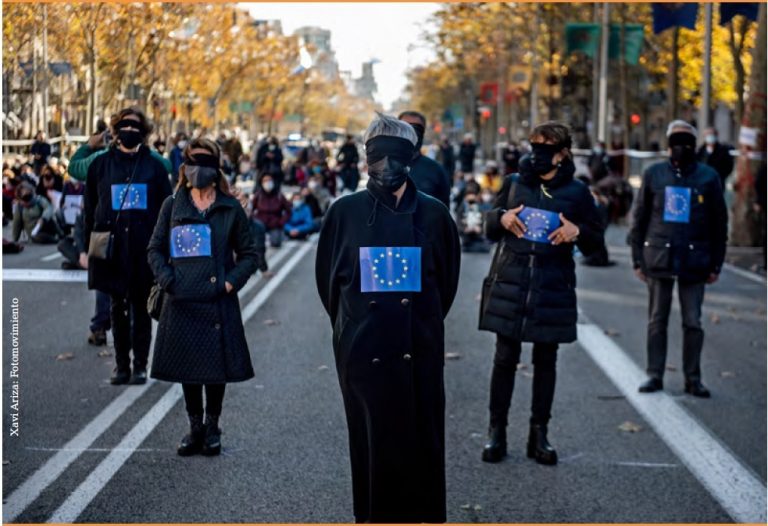 In recent years, attacks on human rights organisations and activists working to defend migrants’ rights have increased dramatically in Europe. Migrant deaths have also soared, with 1,146 people losing their lives in the Mediterranean Sea in the first half of 2021 alone, and more than 40,000 people having drowned since 2014. However, policies to deter migration and seal off borders continue to prevail over the imperative to respect human rights and save lives at both European Union and member State level.  This, coupled with an overall closing civic space in the region, has increased pressure on individuals and organisations that continue to raise their voices to defend migrants’ rights and provide assistance to people in distress at Europe’s land and sea borders, as documented by the Observatory (OMCT-FIDH) in a report published today.

The report, titled Europe: Open Season on Solidarity, provides an analysis of the patterns of criminalisation of solidarity through the voices of those defending migrants’ rights throughout Europe. Its findings are based on 20 interviews with organisations and defenders in 11 European countries, as well as with civil society networks working on this issue at a European and global level. Three concerning patterns are consistently observed across the continent: the creation of a hostile environment, a rise in stigmatising narratives, often amounting to hate speech, against migrants and those working in their defence, and the hindering of the work of these defenders and their organisations which, in some cases, leads to their criminal prosecution.

The demonisation of migrants who have not been able to access safe and legal channels to enter Europe is the first step leading to the attacks against those showing solidarity with them. In many cases, stigmatisation and hate speech have escalated to acts of physical violence against rights defenders. Smear campaigns, defamation and public accusations have led to many organisations in countries being shut down or banned. The report deals with Hungary and the criminalization of Hungarian human rights defenders in separate chapters.

The report came a day before the Court of Justice of the European Union (CJEU) rules on whether the threat of criminal prosecution against people that assist asylum-seekers violates EU law.

For more details about Hungary read the report >>