According to the current state of affairs, one year after the elections – not including the Prime Minister – 31 of the 32 most important leaders of the state apparatus will be the same person as they are now. Even in the case of an opposition victory. In fact, having a two-third majority in Parliament, Fidesz can get even more of our public dignitaries cemented into their seats anytime until the elections in April, for an even longer period. With the Hungarian Helsinki Committee’s useful infographics, we can “look into the future”. 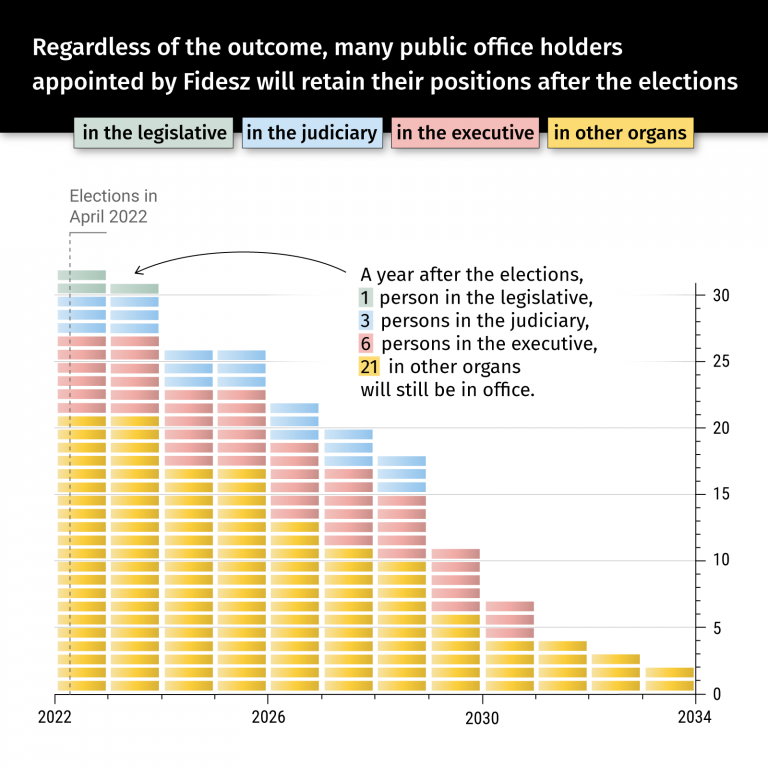 Monika Karas, president of the National Media and Infocommunications Authority (NMHH) and the Media Council retired from her prominent positions in mid-October. She was elected in 2013. However, somehow, it was not the fact of her resignation, but the HUF 41 million amount of severance pay and compensation that interested the independent press the most. True: the question of why someone who resigns by their own decision to seek new challenges as vice president of the State Audit Office is entitled to any extra compensation is a question interesting enough. However, the timing of her resignation has much greater significance.

In fact, Karas’ appointment at the NMHH would have expired this August, and at the Media Council, in September. This means that in case of a potential victory by the opposition, it would have become possible to have someone who is not Fidesz’s and the PM’s person to oversee the media and telecommunication.

This threat was averted by Viktor Orbán, whose proposal, without any professional or political consultation, led President János Áder to appoint András Koltay, a trusted cadre of the regime and former rector of the University of Public Service, as head of the NMHH on 3 December.  It didn’t take long for him to win leadership of the Media Council, as well, on 14 December. This way, he is cemented for nine years into not one, but two seats.

The master and his assistants

Viktor Orbán is holding the trowel, while his assistants are sitting in the Fidesz and KDNP fractions, dependant on him personally, therefore voting for the PM’s candidates without a word. In fact, these leaders serve as safeguards for the survival of the current illiberal system even if Fidesz should lose the elections.

The Hungarian Helsinki Committee’s  infographics, Cementezettek says a lot about the potential plans of the “master mason”, potential further personal changes and resignations.

It is already known that the successor of János Áder will also be elected by the Fidesz-dominated Parliament before the general elections. The current government is lucky, as the present President’s mandate runs until 10 May, and, pursuant to the provisions of the Fundamental Law, the person of the new president must be determined at least 30, but no more than 60 days before that date. This will with all probability be Katalin Novák, from Viktor Orbán’s party, his former minister and loyal follower.

Guardians of our money

It is no wonder, either, if László Domokos, president of the State Audit Office  does not fulfil his 12-year mandate expiring in July, and if his successor will not be voted by the next Parliament “of an uncertain composition”, but by the current parliamentary majority. It would be daring to speculate, but we wouldn’t be surprised if it were Karas taking over his office.

The State Auditor is a member of the Fiscal Council, authorised by the Fundamental Law to veto the national budget or an amendment of it, thus overthrowing the government and in the worst case, forcing new general elections. In this body of three members, the president of the National Bank of Hungary (György Matolcsy until March 2025) joins the president of the State Audit Office. The mandate of the president of this council, 73-year-old Árpád Kovács, expires in January 2024. It is not certain that he will retire ahead of time, but it may happen.

Cemented people at the courts

Cementezettek also shows that the current government has nothing to fear from those sitting at the top of the judiciary for a long time coming. Leadership of the Curia, the National Office of the Judiciary, as well as the Office of the Prosecutor General remain in reliable hands until 2028. Unless some kind of unforeseen healthcare, corruption or other risk arises, there is no point in replacing them.

Fidesz has a safe heartland in the Constitutional Court, as well. Even though four members’ mandates expire in September 2023, as the government increased the headcount of the body to 15, if all goes according to plan, the judges elected with Fidesz majority will remain in office until November 2026.

The cement has set. The only question is, will the most prominent public officers be loyal to their “master”, or to their constitutional duty? We can keep guessing until April.

Visit the page for more: https://cementezettek.helsinki.hu/en/