Ensuring access to the territory and to the asylum procedure for persons in need of international protection.

Ensuring access to the territory and to the asylum procedure for persons in need of international protection.

A tripartite Memorandum of Understanding was concluded by the Hungarian Border Guard, the Hungarian Helsinki Committee and UNHCR on 28 December 2006. It had grown out of a pilot border monitoring project between the three parties and it formalizes the cooperation, roles and responsibilities as well as working methodologies of each Party.

Under the MoU, monitors of HHC regularly visit short term detention facilities along the Ukrainian, Serbian border as well as at the international airport in Budapest and talk to the foreigners found there. They also look into case files which have been rendered anonymous to comply with data protection laws of those who were sent back to a third country. A Working Group composed of the senior representatives of the parties’ reviews the implementation and discusses the problems that need to be addressed. The Working Group also conducts ad hoc field visits and proposes training activities for the border police. Training activities are designed and undertaken both at the senior/managerial and the field/expert level on intercultural awareness, the principle of non-refoulement and protection sensitive entry systems and communication with asylum-seekers with special needs.

The tripartite cooperation has contributed significantly to enhancing human rights friendly, protection sensitive border management in Hungary. The MoU is a unique example of a best practice cooperation framework amongst law enforcement agencies, UNHCR and NGOs aimed at ensuring access to territory and to the asylum procedure for person who need international protection.

The report Asylum Seekers’ Access to Territory and to the Asylum Procedure in the Republic of Hungary is the first publication resulting from our cooperation in border monitoring. The report summarises the findings of the border monitoring programme in 2007 and contains recommendations for future joint action.

The three organisations pubished the next – biannual – report on border monitoring in the framework of the tripartite coopration in December 2010. The Report on the Border Monitoring Programme 2008-2009 is available in English.

The report about the activities of 2010 is also available by clicking at the image below. 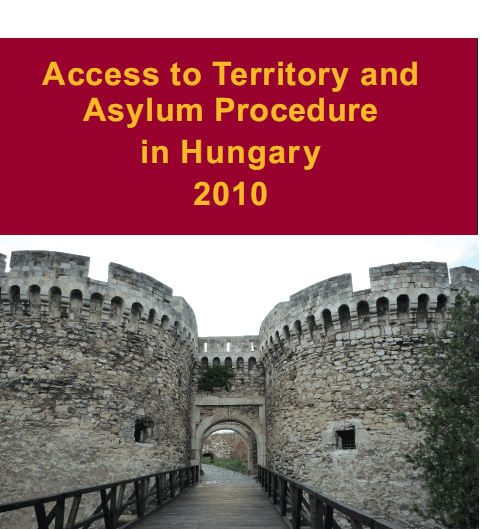 The report about the activities of 2011 is available in Hungarain and  English.

The report on activities carried out in 2012 is available here.

The report on border monitoring activities of 2013 is available in English here.