Our client wanting to seek asylum was pushed back to Serbia without any examination of his individual circumstances. 72 000 such cases occurred in the course of 5 years. The Pakistani man’s case was no different from many of his fellow migrants in the fact that he was beaten up by Hungarian police officers, but it was different in the fact that he turned to the European Court of Human Rights. This Thursday, the Court will rule on his push-back: if the judges in Strasbourg interpret these cases as collective expulsion, then this police state practice finally has to end.

Pakistani citizen Khurram Shahzad and 11 others crossed the Serbian-Hungarian border with no documents on 11 August 2016. They were caught by Hungarian police the next morning in a field outside Katymár. Our client explained in English that he wanted to seek asylum, but the acting police did not care.

While as of the summer of 2016, people could “only” be pushed back to Serbia from that 8 km wide area, this has been extended to  the whole territory of the country after March 2017. This means that we represent people who were pushed back to Serbia, where they had never been before, straight from the Liszt Ferenc Airport.

Police don’t even take personal data when carrying out push-backs people. Over the course of 5 years, 72 000 such cases have been recorded by the police. This does not mean that 72 000 people have been pushed back since the summer of 2016. With little to no other options to seek protection, most victims of push-backs try to cross the border over and over again, until they finally succeed.

Our client was photographed on the field, then put into a police minivan and taken to the border fence with the others. At the fence, he was made to read out a document stating that they acknowledge that they are not allowed to seek asylum, which is only possible in the transit zone, and that they may file a complaint against the police measures.

This was largely a theoretical option: in practice,  only few people were allowed to (legally) enter the transit zones in Röszke and Tompa to file their asylum application. Moreover, there was no chance of a fair procedure in their case. Try as they might, in practice, these young single men, including our client, did not have a chance of entering the transit zone, having their story heard and their asylum application examined in its merits. 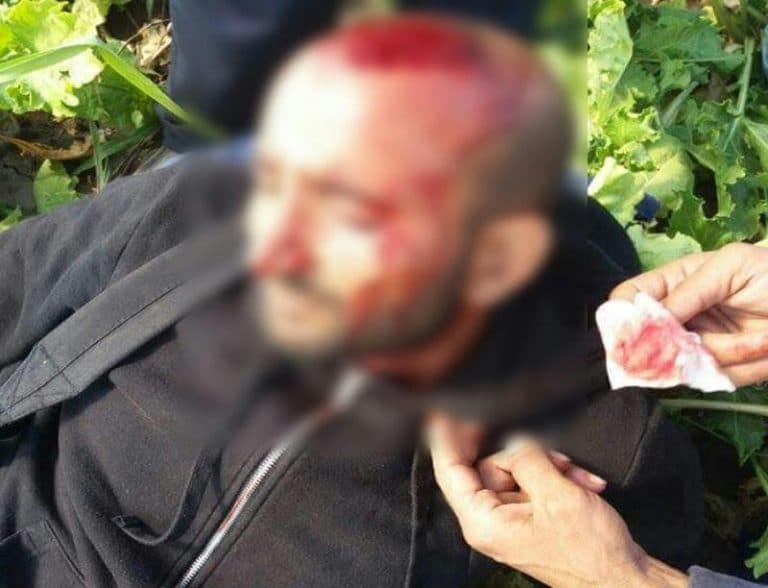 Khurram Shahzad and his peers were ushered over the gate built into the border fence, and ordered to sit down on the grass on the Serbian side of the fence. According to our client’s testimony and the video made by the police, the sitting men, including him were surrounded by Hungarian police officers on the Serbian side of the fence. The video, the existence of which was initially denied by the police, then finally transferred to the public prosecutor’s office during the investigation, ends here.

According to our client’s report and Serbian hospital reports, the story continued by one of the police officers standing around Khurram Shahzad and his peers shouting something, and then the other police officers beating them up. Our client was hit  among others on his head; his injuries were so severe that he was admitted to the emergency department of the Subotica hospital in Serbia that night. The 10 and 4 centimetre-long wounds on his head were stitched up there. Not long after the assault, a photograph was taken of the injuries, and later in the Subotica hospital a medical report was also drawn up.

With the assistance of the Hungarian Helsinki Committee, Khurram Shahzad filed two complaints with the Strasbourg-based European Court of Human Rights (ECtHR). One of them was about the push-back, which – like in all cases – lacked any legal guarantees; he was removed from the territory of Hungary without his asylum application being reviewed, with his personal circumstances being ignored, becoming the victim of collective expulsion, prohibited by Protocol 4 to the European Convention on Human Rights. In the second procedure, he filed a complaint with the Strasbourg court due to the inadequacy of the investigation into his assault. This Thursday, the ECtHR issues a judgement in the first case.

This will be about much more than our client’s personal grievances. In December 2020, the Court of Justice of the European Union (CJEU) already declared that the Hungarian regulation of push-backs was contrary to EU law. Subsequently, Minister of Justice Judit Varga turned to the Constitutional Court. The  police, ignoring the CJEU’s final decision, continues carrying out push-backs, about 22 000 of them since December 2020. In such a situation, the judgment, delivered on 8 July 2021, will be of particular significance.