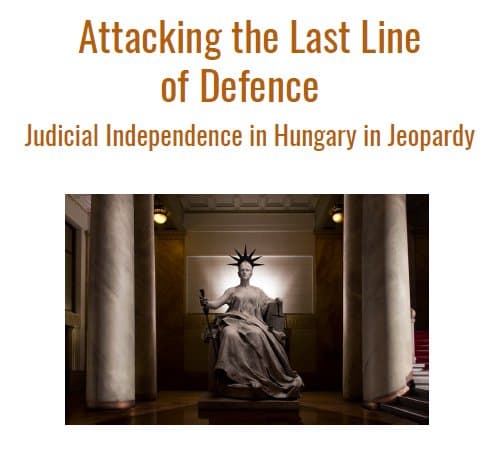 A new draft legislative package that limits judicial independence and restricts the freedom of judges to interpret the law is a serious threat to the rule of law in Hungary and runs counter to values Hungary signed up to when it joined the European Union. If these amendments to the Fundamental Law are passed by Parliament on 20 June, a new court that may be dominated by judges arriving from the state’s public administration will rule on cases involving elections, taxes, and public procurement, among many other key issues. Its head will be a political appointee selected by Parliament. Unless European institutions challenge the Hungarian government’s campaign of centralizing power over the judiciary, the rule of law will be deeply undermined.
The Hungarian Helsinki Committee’s new publication, Attacking the Last Line of Defence – Judicial Independence in Hungary in Jeopardy, goes further than only explain the risks of the current proposals: it demonstrates how, since 2010, law has been used as an instrument of power which has seriously undermined the rule of law.

Armed with a constitutional majority in parliament, the Hungarian government’s assault on judicial independence presents not only a clear risk of a serious breach of the rule of law, but also a challenge to the European Union’s legal order. This is weakening the entire European project from within. Quick and resolute action by the European Union and the international community can still avert this major threat to rule of law in Hungary.

You can find our publication here.